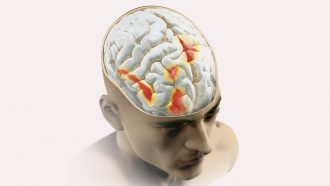 Placebos can make us feel better. Mild electric zaps to the brain can make that effect even stronger, scientists report online May 3 in Proceedings of the National Academy of Sciences. The finding raises the possibility of enhancing the power of expectations to improve treatments.

This is the first study to boost placebo and blunt pain-inducing nocebo effects by altering brain activity, says Jian Kong, a pain researcher at Massachusetts General Hospital in Charlestown.

To play with people’s expectations, Kong’s team primed 81 participants for painful heat. The heat was delivered by a thermal stimulator to the forearm while participants lay in a functional MRI scanner. Each person received three creams, each to a different spot on their arms. One cream, participants were told, was a numbing lidocaine cream, one was a regular cream and one was a pain-increasing capsaicin cream. But in fact, all the creams were the same inert lotion, dyed different colors.

Before testing the placebo and nocebo effects, researchers had delivered electric currents to some participants’ brains with a method called transcranial direct current stimulation, or tDCS. During these tDCS sessions, two electrodes attached to the scalp delivered weak electric current to the brain to change the behavior of brain cells.

Brain stimulation affected neural pathways that were already thought to be involved in the placebo and nocebo effects. Cathodal tDCS, for instance, boosted connections between the targeted brain area with a nearby area involved in emotion and cognition.  This strengthened pattern correlated with participants reporting a stronger placebo effect, Kong and his colleagues found.

“This is a very elegant study and I’m very excited and enthusiastic about it,” says Luana Colloca, a neuroscientist at the University of Maryland Baltimore. Colloca, who wasn’t involved in the study, sees the potential to help chronic pain patients by ramping up the placebo effect (SN: 9/13/18). “We’re not there yet,” she cautions. “We need to see if these same results can be replicated in patients with chronic pain.”

Kong agrees. His study was small, and people experience pain and placebos differently. “But I have to say, this is also encouraging,” he says.