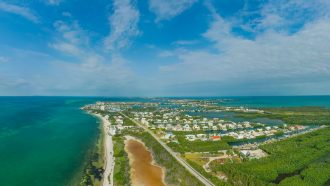 The first genetically modified mosquitoes that will be allowed to fly free outdoors in the United States have started reaching the age for mating in the Florida Keys.

In a test of the biotech company Oxitec’s GM male mosquitoes for pest control, these Aedes aegypti started growing from tiny eggs set out in toaster-sized, hexagonal boxes on suburban private properties in late April. On May 12, experiment monitors confirmed that males had matured enough to start flying off on their own to court American female mosquitoes.

This short-term Florida experiment marks the first outdoor test in the United States of a strain of GM male mosquitoes as a highly targeted pest control strategy. This strain is engineered to shrink local populations of Ae. aegypti, a mosquito species that spreads dengue and Zika (SN: 7/29/16). That could start happening now that the GM mosquitoes have reached mating age because their genetics makes them such terrible choices as dads.

The mosquitoes now waving distinctively masculine (extra fluffy) antennae in Florida carry genetic add-ons that block development in females. No female larvae should survive to adulthood in the wild, says molecular biologist Nathan Rose, Oxitec’s chief of regulatory affairs. Half the released males’ sons, however, will carry dad’s daughter-killing trait. The sons of the bad dads can go on to trick a new generation of females into unwise mating decisions and doomed daughters (SN: 1/8/09).

The trait is not designed to last in an area’s mosquitoes, though. The genetics just follow the same old rules of natural inheritance that mosquitoes and people follow: Traits pass to some offspring and not others. Only half a bad dad’s sons will carry the daughter-killing trait. The others will sire normal mosquito families.

Imagined versions of live-mosquito pest control in Florida have been both glorified and savaged in spirited community meetings for some time (SN: 8/22/20). But now it’s real. “I’m sure you can understand why we’re so excited,” said Andrea Leal, executive director of the Florida Keys Mosquito Control District, at the mosquito test (virtual) kickoff April 29.

The debate over these transgenic Ae. aegypti mosquitoes has gone on so long that Oxitec has upgraded its original more coddled version with one that is essentially plug and play. The newer strain, dubbed OX5034, no longer needs a breeding colony with its (biting) females and antibiotics in easy reach of the release area to produce fresh males.

Instead, Oxitec can just ship eggs in a phase of suspended development from its home base in Abingdon, England, to whatever location around the world, high-tech or not, wants to deploy them. Brazil has already tested this OX5034 strain and gone through the regulatory process to permit Oxitec to sell it there.

The targets for these potential living pest controls will be just their own kind. They represent only about 4 percent of the combined populations of the 45 or so mosquito species whining around the Keys. Other species get annoying, and a more recent invader, Ae. albopictus, can also spread dengue and Zika to some extent. Yet Leal blames just about all the current human disease spread by mosquitoes in the Keys, including last year’s dengue outbreak, on Ae. aegypti.

It’s one of the top three mosquitoes in the world in the number of diseases it can spread, says Don Yee, an aquatic ecologist at the University of Southern Mississippi in Hattiesburg, who studies mosquitoes (SN: 3/31/21). His lab has linked at least three dozen human pathogens, including some viruses and worms, to Ae. aegypti. Although most mosquitoes lurk outdoors in vegetation, this one loves humankind. In the tropics, “the adults are literally resting on the walls or the ceiling,” he says. “They’re hanging around the bathroom.” The species bites humans for more than half of its blood meals.

In a long-running battle with this beast, staff in Florida in late April added water to boxes of shipped eggs and set them out at selected suburban private properties on Vaca, Cudjoe and Ramrod Keys. Other spots, with no added mosquitoes, will be watched as controls. All locations were chosen in part because American-hatched females of the same species were already there to be wooed, Rose says.

Toaster-sized hexagonal boxes (one pictured) that contain eggs of genetically modified Aedes aegypti were set out on selected private property in the Keys in late April. There the males develop normally — and then fly away to mate.Oxitec

Males typically don’t billow out of their boxes in a gray cloud but emerge sporadically, a few at a time. If all goes well in this preliminary test, up to 12,000 GM mosquitoes in total across the release sites will take to the air each week for 12 weeks.

Neighboring households will host mosquito traps to monitor how far from the nursery boxes the Oxitec GM males tend to fly. That’s data that the U.S. Environmental Protection Agency wants to see. Based on distance tests elsewhere, 50 meters might be the median, Rose estimates.

The distance matters because pest controllers want to keep the free-flying GM mosquitoes away from outdoor sources of the antibiotic tetracycline. That’s the substance the genetic engineers use as an off switch for the self-destruct mechanism in female larvae. Rearing facilities supply the antibiotic to larvae, turning off the lethal genetics and letting females survive in a lab to lay eggs for the next generation.

If GM males loosed in Florida happened to breed with a female that lays eggs in some puddle of water laced with the right concentration of tetracycline, daughters that inherited the switch could survive to adulthood as biters and breeders. The main possible sources in the Keys would be sewage treatment plants, Rose says. The test designers say they have selected sites well away from them.

After the distance tests, bigger releases still start looking at how well males fare and whether pest numbers shrink. Up to 20 million Oxitec mosquitoes in total could be released in tests running into the fall.

Despite some high-profile protests, finding people to host the boxes was not hard, Rose says. “We were oversubscribed.” At public hearings, the critics of the project typically outshout the fans. Yet there’s also support. In a 2016 nonbinding referendum on using GM mosquitoes, 31 of 33 precincts in Monroe County, which comprises the Keys, voted yes for the test release. Twenty of those victories were competitive though, not reaching 60 percent.

The males being released rely on a live-sons/dead-daughters strategy. That’s a change from the earlier strain of Oxitec mosquitoes. Those males sabotaged all offspring regardless of sex. The change came during the genetic redesign that permits an egg-shipping strategy. Surviving sons, however, mean the nonengineered genes in the new Oxitec strain can mix into the Florida population more than in the original version.

Those mixed-in genes from the test are “unlikely” to strengthen Floridian mosquitoes’ powers to spread disease, researchers from the EPA and the U.S. Centers for Disease Control and Prevention wrote in a May 1, 2020 memorandum. Many factors besides mosquito genetics affect how a disease spreads, the reviewers noted. Oxitec will be monitoring for mixing.

There may be at least one upside to mixing, Rose says. The lab colonies have little resistance to some common pesticides such as permethrin that the Floridian mosquitoes barely seem to notice.

Pesticide resistance in the Keys is what drives a lot of the interest in GM techniques, says chemist Phil Goodman, who chairs the local mosquito control district’s board of commissioners. During the dengue outbreak in 2009 and 2010, the first one in decades, the district discovered that its spray program had just about zero effect on Ae. aegypti. With some rethinking of the program’s chemicals, the control district can now wipe out up to 50 percent of mosquitoes of this species in a treated area. That’s not great control, at best. Then when bad weather intervenes for days in a row, the mosquitoes rebound, Goodman says.

The invasive mosquito species Aedes aegypti (shown), which can spread Zika, dengue and yellow fever, is now under attack in the Florida Keys by GM males genetically tweaked to sabotage the American mosquito populations.Joao Paulo Burini/Moment/Getty Images Plus

Since that 2009–2010 outbreak, catching dengue in Florida instead of just through foreign travel has become more common. In 2020, an unusually bad year for dengue, Florida reported 70 cases caught locally, according to the CDC’s provisional tally.

Traditional pesticides can mess with creatures besides their pest targets, and some critics of the GMO mosquitoes also worry about unexpected ecological effects. Yet success of the Oxitec mosquitoes in slamming the current pests should not cause some disastrous shortage of food or pollination for natives, Yee says. Ae. aegypti invaded North America within the past four centuries, probably too short a time to become absolutely necessary for some native North American predator or plant.

For more details on pretrial tests and data, the Mosquito Control District has now posted a swarm of documents about the GM mosquitoes. The EPA’s summary of Oxitec’s tests, for instance, reports no effects noticed for feeding the aquatic mosquito larvae to crawfish.

Yee doesn’t worry much about either crustaceans or fish eating the larvae. “That’s somewhat analogous to saying, well, we’re concerned about releasing buffalo back into the prairies of the Midwest because they might get eaten by lions,” he says. Crawfish and fish, he notes, don’t naturally inhabit the small containers of still water where Ae. aegypti mosquitoes breed.

Still, new mosquito-fighting options are springing up: Radiation techniques might become precise enough to sterilize males but leave them attractive enough to fool females into pointless mating. And researchers are developing other genetic ways to weaponize mosquitoes against their own kind.

One technique that uses no GM wizardry just infects mosquitoes with Wolbachia bacteria that make biting unlikely to spread dengue. The latest data from Mexico and Columbia suggest this infection “could be effective in the southern U.S. and across the Caribbean,” says biologist Scott O’Neil, based in Ho Chi Minh City, Vietnam, founder of the World Mosquito Program.

He has no plans for working in the United States but is instead focusing on places with much worse dengue problems. His version of the Wolbachia strategy just makes bites less dangerous (SN: 6/29/12). The mosquito population doesn’t shrink or grow less bloodthirsty, so this approach might not appeal to Floridians anyway.